As part of the Regional Conference for Europe organized by the Food and Agriculture Organization of the United Nations aiming at stronger regional partnership and cooperation, meeting was organized between the FAO Director General – Mr. José Graziano da Silva and the SWG Secretary General – Mr.Boban Ilic.

They had a productive exchange of views on development objectives and challenges in the agriculture and rural development sectors in Europe, particularly in Western Balkan countries and mutually agreed in pursuing the following conclusions and goals:

As part of the Reginal Conference for Europe Ministerial Roundtable will be organized debating on “The Sustainable Development Goals and their implications for agriculture and rural development in Europe and Central Asia region”.

Sustainability of agricultural production is of utmost importance for Europe and Central Asia. This implies the necessity for integrated, evidence-based approaches to policy formulation at national, regional and global levels, capacity development to ensure coherent, effective and inclusive governance and efficient monitoring structures. Key elements in the successful implementation of the Sustainable Development Goals (SDGs) are the country ownership and accountability for sustainable development as well as the integration of targets and indicators in the respective sectoral policies at national level.

Another main topic for discussion at the ERC will be “Priorities for FAO’s work in the region” where the FAO Secretariat will present the trends, development objectives and challenges of the region, highlighting points of importance for priority setting in the next programming cycle as preparation for the Medium-Term Plan 2018-21. 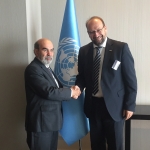